One of the projects on the list when we moved in was to replace the toilet – it worked okay, but it was old, a little ugly and used a lot of water, and it got dirty very easily.  Also, it is very close to the wall, as seen below, so when we painted, we couldn’t really reach behind it to get rid of some of the dreadful pink, so there has been a toilet shaped spot of pink there for years.  The toilet was so close to the wall that sitting on it was a kind of cramped, despite the bathroom itself being fairly large. 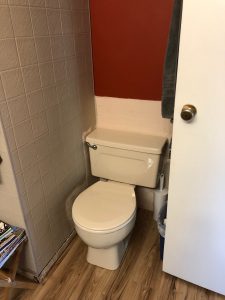 Replacing it was not a high priority on the to-do list, but a couple weeks ago, the flapper started leaking, very slowly at first, then constantly, and then constantly, but louder (it was just leaking into the bowl, so it wasn’t like we had to clean things up every day, but wasting water is, well, wasteful!).

Pretty early on in our move, I started doing research into what kind of toilet we wanted. Last year we had to replace the toilet in our cottage in a true emergency (the tank cracked while someone was staying there!), and we got a comfort (chair) height toilet with dual-flush, but it wasn’t a brand I had ever heard of, but hey, it was in stock!  It is…okay.  It works, stays pretty clean, saves water, and looks pretty nice, but it doesn’t feel like it’s built for longevity, in fact, the seat that came with it has already started to show signs of wear.  So I knew I wanted a higher quality toilet, and we both prefer the lower standard height, but I also wanted something more in keeping with the more modern look we’re kind of going towards.  I found one I really liked from White Haus, but it got fairly low reviews, with people saying they could not get parts for it in a reasonable amount of time.  And then I saw identical toilets popping up from other manufactures that I had never heard of, and so I decided we should just get something entirely different.  I found a one-piece American Standard that we could get from our local big box hardware store that had good reviews, had all the features we wanted (white,  standard height, dual-flush, one piece with a 12″ rough-in), and looked nice!

It was going to take a few weeks for the toilet to get here, so we blocked off a couple days in the cottage from AirBnB, and when it got here, I started to take apart the old toilet to remove it.  Needless to say, removing the tank from the bottom was very complicated because of old rusted bolts, so we smashed it! 😄

After removing it, and piling it into car for recycling (which our local sanitary company no longer does, despite their website still saying they do), we had a bit of a mess to clean up, as you can see below. 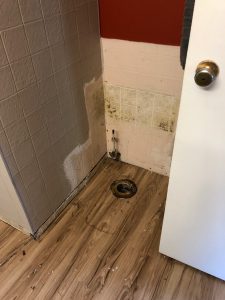 But, after cleaning, and a couple coats of paint, things were starding to look pretty good! 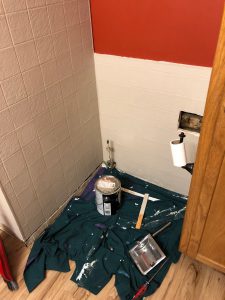 And, that’s when things started to go wrong.

One of the things I had read about when replacing the toilet in the cottage was “rough-in size”.  Basically, that’s how far from the wall behind the toilet (I believe it’s actually from the studs) the center of the hole for egress is.  It’s also where the bolts for holding the toilet down are.  I know the cottage toilet was a 12″ rough-in, and I was almost certain I had measured this one too, but, alas, that turned out not to be the case.  The house has a 10″ rough-in (which meant that the toilet expected the hole to be 2″ further out into the room!).  We decided to take this crisatunity to see if we could move the toilet a couple inches away from the wall – two inches out and two inches to the right (as you look at the pictures) would be just about ideal!  So we called a few plumbing companies, and found one that could come the same day and do it.  It wasn’t a cheap job, but it wouldn’t have been all that much more than buying a non-ideal toilet Right Now (all the 10″ rough-in toilets we could find that were locally in stock were comfort height), and then replacing it again.  Plus, we really wanted to get the toilet moved over a couple inches!  So, we told them exactly what we wanted, and let them get on with it.  They said there was a lead pipe going down into a cast iron, so it was packed with oakum and sealed with molten lead.  So after a lot of work and noise, they said “it’s done!” and we were really excited!  And then we came in and saw they had moved the hole over almost six inches to the right… 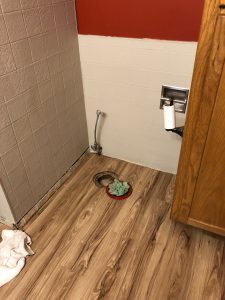 The two big issues there are 1) when you leave the door open (as our cats demand we do) it is where your left knee needs to be, and 2) the old toilet paper holder was now in the way of the tank! 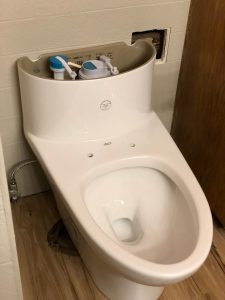 We had been planning on leaving the old toilet paper hold there until we did a big remodel, but we couldn’t just leave a hole in the wall, so we needed something to cover it now.  We wanted to try and find something to match the ugly textured fake tile, but there wasn’t any extra behind the big cabinet to the right of the toilet, so we used a flat piece of pressboard and spackled the rest of texture flat! 😂 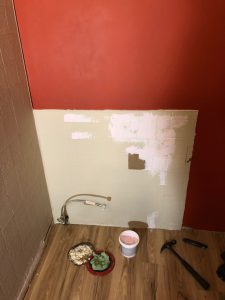 After a bunch of spackling, priming and painting again, we were almost ready to go!  That’s when one of our kitties decided it was a good time to play in the new toilet. 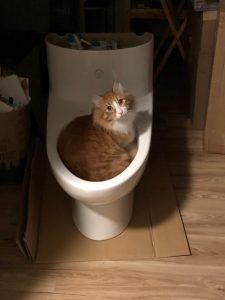 But, now we’re back to having a working toilet,and thought we still have a hole in the top-layer of the flooring (the lugggzhury vinyl flooring we bought was out of stock at the place we bought it from 😖), it is mostly hidden.  Now we need to replace the large door with either a 2-piece folding/sliding door, or a 2-piece french door.  If you have any suggestions, please let us know in the comments! 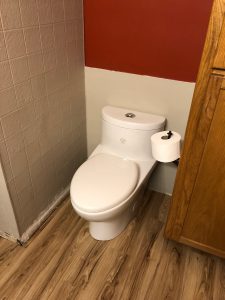 This site uses Akismet to reduce spam. Learn how your comment data is processed.

Theme by Anders Noren — Up ↑